On the afternoon of June 11th, a group of people gathered in a small auditorium with high, sloped ceilings and shiny wooden floors.  Within minutes a range of voices emanated from the low stage, filling the room to capacity and mesmerizing the audience. 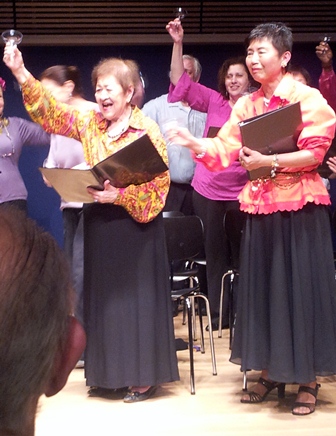 These were the Hamilton Center singers, showcasing the opera music they had been practicing for the last ten weeks.  With the help of opera singers Jackie Schiffer and Mary Feinsinger this group of twelve seniors prepared selections from several Italian operas to perform on June 11th at Opera America.

“People come alive through art,” Jackie said about her experience working with the group from Hamilton.  ”To really witness it first hand was really such a special thing.”

The singers were thrilled to be able to share their talents, as many of them are retired from professional music careers.

The group sang several selections from well-known Italian operas, with each one introduced with a short explanation of the context.  Between selections several of the singers read reflections on the experience of learning and performing opera.

Dolores Ranghelli spoke about opera connecting her to her Italian mother.

“When singing, I feel like a bird let out of its cage,” she told the audience. “It's a glorious feeling.”

Connie Bartusis also reflected on her experience, highlighting the industry exposure that the group had, from costume designers to opera students who stopped by their class and spoke about their jobs.

“Above all there was no greater thrill than being able to sing this magnificent music yourself!” Connie shared.

For the last selection, Libiamo from La Traviata, the singers even procured wine glasses and acted out a party scene.

Dolores Bradwell sang blues and jazz when she was younger.  She was thrilled to have a new musical frontier to conquer.

“I hadn’t done anything like working with opera groups since my early 20s,” she said.  Even though the class had the potential to be overwhelming, Dolores said that Mary Feinsinger made it a lot easier by writing out the Italian lyrics phonetically and also facilitating breathing and vocal cord exercises. 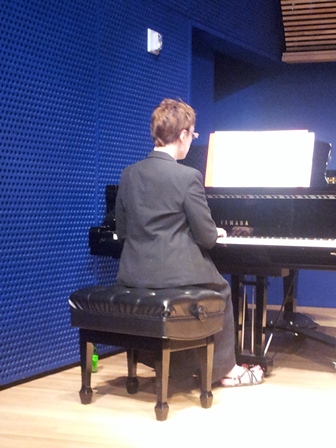 Singer Mary Rocco performed musical theater as an actress for a living when she was younger.  She had used her soprano voice many times before but never in its operatic capacity.  The performance was the highlight of her experience, she said.

”It was very nice singing a variety of songs and learning a different language,” she explained.

Mary Feinsinger is a composer, singer and all around musician.  She admitted in her speech to the crowd that she was at first unsure if the program would be a success.  By the time of the performance though, she gushed with pride and happiness at the results that she saw.

“These people are amazing,” she stated simply. “The level of sophistication and musicality was exemplary.”