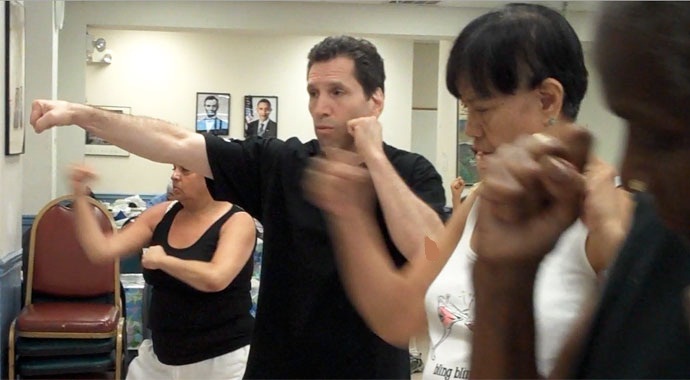 People often view martial arts as something for young people who watch kung fu movies. Project FIND’s seniors prove that this is not so: they love Sensei David’s classes. (Sensei is a Japanese term of respect that means teacher.) He has designed them so that students who prefer or need to sit can participate and still benefit from the class. Most of Sensei David’s students are able to move through the one-hour class without resting; a few take breaks or use a chair for balance.

Karate is the Japanese art of unarmed self-defense. It is an exercise which uses the body’s natural movements and combines quiet stances with quick action. David’s class alternates between slow, controlled movements, and ones that are more vigorous, such as kicking. Karate movements require a lot of weight shifting, which helps improve balance, an important benefit for seniors. Sensei David also shows how some of the movements can be used in self-defense.

David Sheeger teaches karate seven days a week but never seems to tire of it. He began studying martial arts more than 20 years ago at the World Oyama Karate Headquarters in Manhattan and began teaching after he received his black belt in 1989. He teaches in a variety of places in New York City, mostly to seniors and children with special needs. You can teach karate, he explains, to everyone from three year olds to 90-year olds. Regardless of whom his students are David’s teaching style remains largely the same. All students, he feels, should be treated with the same measure of respect.

David was a member of the World Oyama Karate Full Contact Team from 1992-1997 and holds a 4th degree black belt in this style. He competed nationally and internationally in the Light Weight Division. Sensei David also has a black belt in Zujitsu Ryu Jujitsu.