The Poets Of Project FIND #1 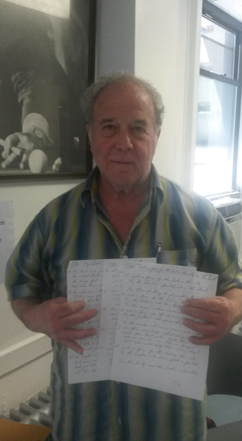 One of the most popular trends that I've noticed around each of the Project FIND centers is poetry. Indeed, not only are the residents enthusiastic about reading poetry, but are also passionate about writing it! Regular classes and workshops are held at the various centers which not only increase people's awareness of poetry as an art, but also encourage and instruct those that attend on how to write their own pieces! In the last few weeks I've met several keen poets who are enthusiastic about sharing their works with a wider audience. One such resident poet, who was kind enough to divulge some of his own works with me is John Di Santa of the Woodstock center. A native New Yorker, he has been at the center since 2003 and has written multiple poems in the last few years. After sharing several with me I found one to be my outright favorite. The piece below is a short tribute to his late father Ralph which he calls 'My Dad.' John spoke a lot about his Father and the impact that he had on his life and personal development. Indeed, he explained to me how his Father had worked hard and paid many extra expenses to that John could have a the best education possible. John therefore attributes any academic achievement in his life to his Father's commitment and perseverance as displayed in the poem below. Enjoy!

My Dad was just a simple man

He worked hard for all he earned

He always put our family first

And here lies the lesson to be learned

He made sure that there was bread on the table

That we were fed and clothed real good

If he had to work overtime for us

He did for us- all that he could.

He didn’t receive a formal education

The fifth grade was as far as he got

But he applied himself and learned on his own

So he could blend into the melting pot

He reminded me of Zorba the Greek,

He loved to laugh and drink good wine

And tell us stories – that amused us all

As we all gathered around dinner time

He taught me how to play checkers

And many card games among the rest

I became the very best

So I honor him on this Father’s Day

As I bring flowers next to his grave

He taught me that being good is what counts

And so I learnt how to behave

He never took any shortcuts in life

He never did anything that was bad

He set examples that were only good

Yes, this man he was my Dad!