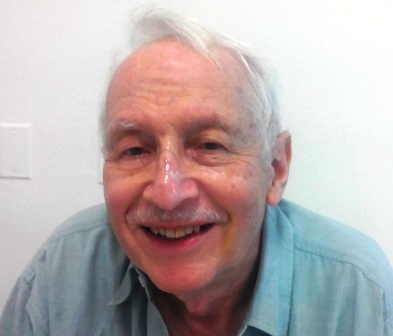 Irwin Goldman, born and bred in New York follows a spiritual path having met Baba Muktananda, and has an interest in Perennial Philosophy, which draws on an array of faiths. Irwin's philosophy reflects in his poetry.

Watch the video reading of Anita Speaks of Heartache here -- the text of that poem as well as The World's a Stage appear below.

Words and actions are leaves in the wind,

Going this way and that,

And the vast universe

In a magical show

Each moment initialed by you.

But you do not know the knower

Of this passing show.

She is pure delight.

He is closer than your shadow.

With such a knowing

The World's a Stage

If I am already perfect, as you say,

Then why, I asked Anita,

Do I have to do spiritual practices?

Or try to be considerate? Or honest?

The person who wakes up in the middle of the night

Asking such a question, she said,

On the stage of a large theatre

Who is wondering whether

To end his stepfather's life;

I assure you Lawrence Olivier

Was not concerned about his stepfather -

For he had none -

Except when he became Hamlet

And then he understood it was a role

With great applause at the end

If he did it well.

Has to do with this, I replied.

You don't see yourself as a role

In a play of your own creation,

Blending actor and role in all

That you think and do.

But the moment you mark the difference,

Your knowledge will be complete,