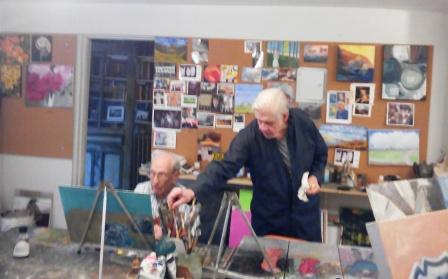 I recently had the good fortune to meet with 3 of our resident artists, Bob Shoales, Rodolfo ‘Rudy’ Diaz and Dolores Ranghelli whose paintings are part of an exhibition, ‘Hell’s Kitchen Painters’ at New York Public Library, Riverside Branch, Amsterdam Avenue at 65th Street (extended until end July 2014). They have been attending, as part of a larger group an external weekly oil painting class run by the artist Elda Cusick, known to her friends as Missy.

Missy has been running the free classes for 15 years, she has a broad and open-ended philosophy that informs the process for her students: she believes there is no end to creativity, that there is always the possibility of something new, something just around the corner waiting to be dreamed.

The studio is run from the first floor of her house right in the heart of Hell’s Kitchen, a neighborhood famously on the rise as a creative urban hub.  The studio itself is full of paintings, easels, paints, brushes and you can feel the artistic energy crackling.  The canine charms of Missy's two dogs Leo and Josephine add a further canine, bohemian edge.

All materials for the classes are donated. In an inspired bit of urban salvage, already painted canvasses which  have been found discarded on the street and would otherwise be headed for the landfill are often found by local homeless folks, and are brought to the studio.  Ezra Cohen,  21 and a student of Edla Cusick since age 8, currently also studying with Knox Martin at the Art Students League, sells his large abstract expressionist canvases steadily, often while wet on the easel. Ezra ploughs back some of his earnings in the form of paints and other supplies for the Wednesday painters.

The students paint over the existing image,  driving and imposing their thoughts and creativity onto the original painting. In a fusion of the old and the new they sometimes cover everything on the surface of the original, and sometimes merge their own imagery with what was on the canvas already.  The found object is transformed, and so is the creative process of the  artist.

Missy's students are encouraged to open their mind and expand their perspective, discover their own way in this whole process. Turn the painting upside down, on the side, look at the reflection in a mirror, see it from  different angles.The students are very encouraging of each other and Missy observes, offering her non-judgemental views on the process as the paintings emerge.

So here I was today in her class, at the beginning of my own journey on canvas.

I picked up a paintbrush and sat before my easel. Thinking about what to paint was certainly a lot more difficult than I thought it would be, looking around the room for inspiration, there was a bowl on the table ‘I should paint that bowl',I muttered out loud "I should paint it as it is, I should start with the outline!"  "Laura", Missy said ... "there is no ‘should’ in this class."

I felt a certain new kind of pressure to find my own way in universe of choice, it was kinetic.  It crackled.  I'll borrow the words of one of my fellow students describing this freeedom rich process " It's  stressful, but it’s a positive stress.’

And that is exactly how I felt.

Leaving the class I felt very pleased that I had been able to focus on my ‘work of art’, you can decide for yourself what you think of the result , but for now it needs a title … please email me your suggestions, or leave them in the comments section below! 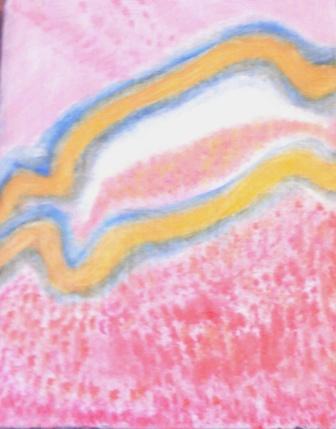