Security At Hargrave #1: From Prussia With Love

One habit that I've picked up since living at Hargrave House is an inability to not leave the building without first passing the security desk and striking up a conversation with the various members of the security team. Indeed, once or twice this has caused me to lose track of time and end up running late to wherever I may be destined! Yet, despite this it's a habit that I refuse to break as not only are the security team at Hargrave comprised of some of the most pleasant and supportive individuals that I've met since coming to New York, but they are also full of experience and have a lineup of interesting backgrounds that I am always keen to hear about. 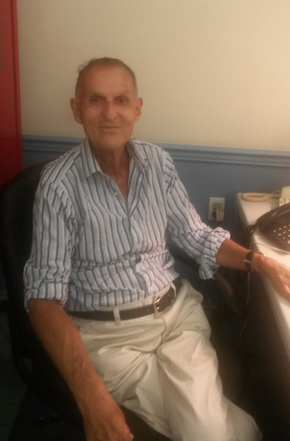 One such character is Peter Hayn, who I got to meet on my first night at Hargrave. He was kind enough to take time out of his break to introduce me to the workings of my apartment and then after the local area and any necessary facilities. Originally born in the East Prussian region of Germany (which is now part of several other European states), Peter first came to New York over fifty years ago in 1962 (the year my Mother was born!) and has worked on the security team at Hargrave for over fifteen years. Despite being an economist by trade, Peter has worked in a variety of exchanges including a German export company and several roles at various restaurants and bars. He has also lived in many other large US cities such as Chicago, Washington DC and San Francisco but shamelessly has always found himself willingly drawn back to New York, an attraction that he himself cannot explain. Furthermore, Peter is also quite well traveled after engaging in a nine month long trip around the world in the 1960s where he saw many of the world's majestic wonders such as the pyramids of Egypt, the hanging gardens of Babylon and the Taj Mahal! In his spare time he enjoys watching tennis and equestrian, or heading to a Broadway show. Unlike the other team members, Peter lives outside of the Project FIND facilities in the historic Ansonnia building not far from Hargrave House, a place he has come to love due to it's high accessibility, historic background and secure surroundings. For Peter, his role at Hargrave provides him with an active routine and a convenient structure to his life, and of course a little bit of pocket money for him to spoil his nieces and nephews with! Undoubtedly Peter's story is both a curious and amiable tale, but it is just one of many hidden aspects of Project FIND, there's many more out there, let's hope I find them.