Security At Hargrave #3: A Résumé To Die For! 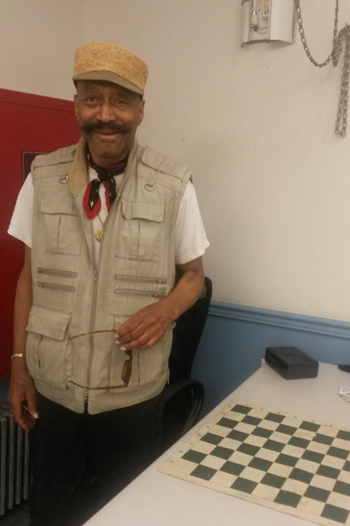 Following on from the two previous entries about the security staff at Hargrave House, allow me to introduce yet another intriguing member of the same team. Indeed, few people that I've met have a résumé as interesting and as decorated as that of Lloyd Epps! Brooklyn born but Staten Island raised, Lloyd started off his career as a US Marine before later taking on a wide range of roles and jobs such as a bus driver, a social worker, a postal worker, an iron worker and a teacher of vocational education. He explained to me that throughout his life he always managed to find multiple employment opportunities, and was actually approached by the Project FIND staff to take on the security role he has now because of his past experience and notable résumé! Lloyd further told me about how he was raised around animals growing up and in time has developed a passion for animal care, with a particular interest in horses. Furthermore, as a youth he explained to me how working at a local stable coupled with playing the horn as a member of a local marching band helped to occupy his time and keep him away from mischief. Lloyd is now into his third year at Project FIND and into his second as a member of the security team, a role which he is keen on and refers to as a 'cushion job.' By this, he explains that it's a soft and laid back job which allows him some quality time to socialize with the residents and those who come and go. Undoubtedly, Lloyd's story makes for an interesting read, like so many others I've found here at Project FIND!