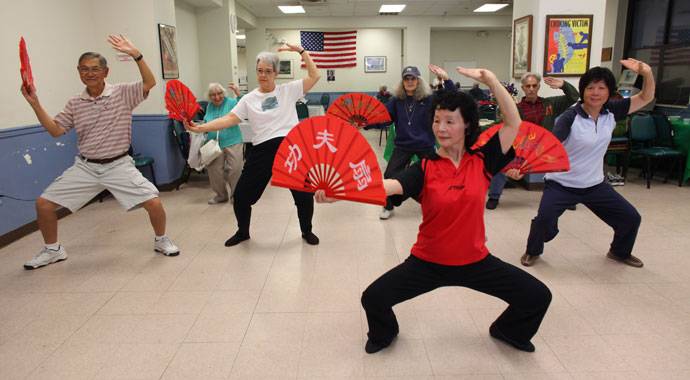 Tai Chi is an ancient Chinese martial art known for its slow, flowing movements. It is a combination of martial art, exercise, and meditation. Tai Chi is known to improve balance, flexibility and strength and is often taught in medical settings such as hospitals and clinics.

Tzu Shan Pan, known as “Susan” to her students, starts the class with a ten-minute warm-up, then moves on to lead the students in continuous movement. Students follow Susan through the 24 movements that make up a set, also called a “24 form.” Some of her classes wanted to do more, so she progressed to 32 movements. After taking a break, the class does some of the same movements with fans, then switches to swords. They return to the 32 form, and then finally cool down. Susan is attentive to her students’ movement, constantly checking them, walking around, encouraging them, and correcting their form. She encourages them to come early to classes if they want more individual help.

Tzu Shan Pan, or Susan, came to the United States from China to work as a computer specialist at a jewelry company in New York City. Although she always loved working with computers, she made time for tai chi as well. During breaks at work Susan taught tai chi to other employees. In 2002, the company moved out of New York but Susan stayed. When a friend and tai chi teacher suggested she teach at Project FIND, Susan wasn’t sure; she had never taught formal tai chi classes. But she tried it and “everyone was so nice to me!” says Susan.

At first, Susan gave her students breaks every ten minutes. Some of them were quite old, in their late 80’s, and Susan thought they needed to rest. But they complained that she was stopping too often! Now she gives one break halfway through class.

Susan loves to talk about the progress her students have made. Some seniors come in, she explains, and they can barely bend their knees. “They see me doing a squat and they say no, too hard, I can’t do it. But soon they are able to.” Susan constantly checks on her students, moving in front of them or next to them to show them movements. “Come early next time,” she said to them. “I'll show you more.”