Parvathy gives us a taste of what she is cooking from Kerala... 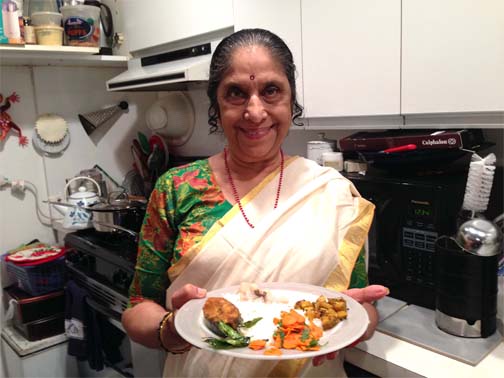 Parvathy is from a state in India called Kerala, which means Land of the Coconut.  She says that most meals from Kerala have coconut in the recipe. Today she demonstrates Kerala Fried Fish which is cooked in coconut oil.

Parvathy used Mackerel when she prepared this dish, because it has one of the highest Omega3 counts.  While Salmon has the highest, due to its distinct flavor, she says it would not go well with this marinate.  Still this recipe could be prepared with Catfish or any mild fish that can be cut into 1/2" steaks.  It could even work with smaller fish, like sardines, that are rich in Omega3.  If using sardines, you can not cut steaks, but you can cut long slits along the outsides of the flesh, marinate and then fry in coconut oil.

Parvathy explains that in Kerala, this fish would be served as a side dish along with basmati rice, and other dishes. Click here to watch her prepare Kerala Fried Fish.