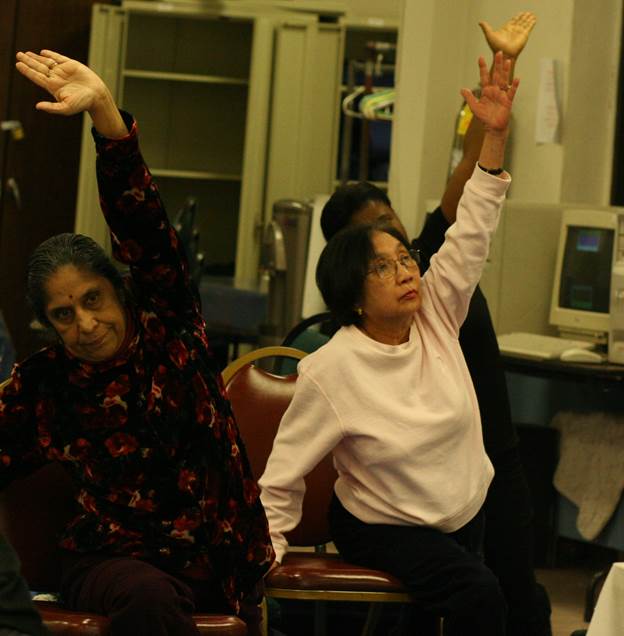 Every Monday morning at 10 am, a yoga class takes place at Hamilton Senior Center.  This is led by instructor Jennifer, who has designed a gentle chair yoga program which is suitable for seniors to come and take part in.

On one such Monday, members drifted in and chatted among themselves while waiting for it to start, creating a friendly and relaxed atmosphere.  Clearly this is a place where people come to socialize and get to know each other, as well as to practice yoga.  Jennifer herself praised this aspect of the class.  It helps “to build a sense of community and friendship” she said.  This was certainly evident at the class, not only with those attending, but between Jennifer and the regular participants too. 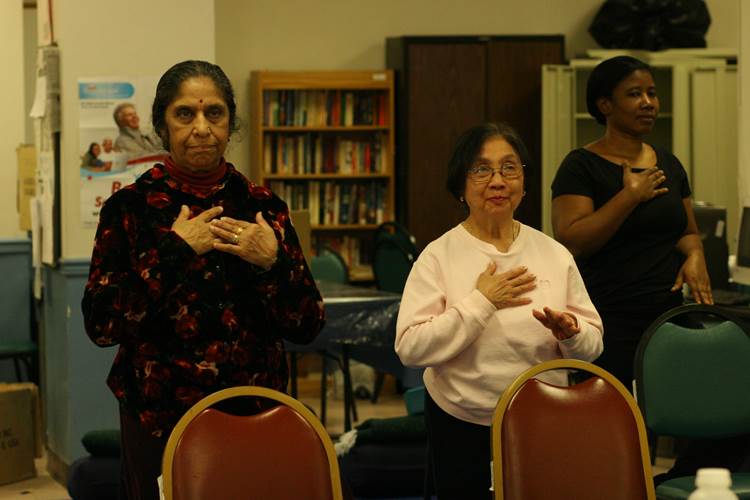 Jennifer explained that yoga is a great choice of exercise for seniors as it has lots of benefits which are particularly good for them.  The different movements and stretches improve flexibility and stamina, which helps people to feel more energized and positive.  Yoga helps to “strengthen the bones” she said, which is especially good for seniors since “bones can become brittle as you get older”.  She also mentioned curvature of the spine and shoulders, which can result in bad posture and loss of height.  Yoga is a great way to combat this as it helps to lengthen the spine and improve posture.  The relaxing movements, massages, and chants are also an excellent way to reduce stress.

One attendee of the class who certainly seemed convinced of the benefits was Shirley Pollack.  She has been coming to the class for around two years now and really enjoys it each week.  Unlike other classes she has attended, she doesn't find it repetitive and she feels she achieves more.  Shirley explained that yoga “releases tensions in my neck”, which also helps with other forms of exercise such as swimming.

The class was broken up into three main sections, working on the upper body while seated in the chair, working on the whole body while standing, or using the chair for support if needed, and then working on the lower body whilst seated again.  It began with stretches to warm up, and breathing exercises to take in oxygen to nourish cells in the body.  This was followed by chanting led by Jennifer, with the participants enthusiastically repeating the chants line by line.  Another aspect of the class involved practicing eye movements.  Jennifer explained that these are particularly beneficial to the seniors as the movements work to strengthen the eye muscles and optic nerve.  This in turn helps to improve mental focus and concentration. 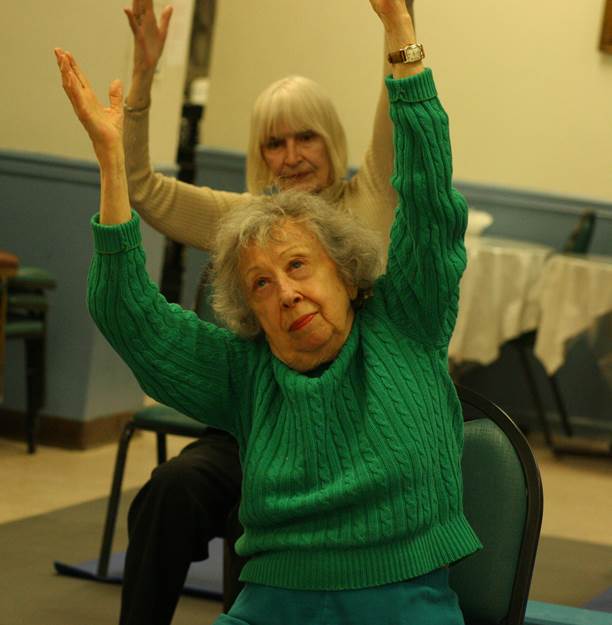 The class then keenly followed Jennifer’s instruction as they were led in a relaxing massage of their eye lids, face, neck, and shoulders before commencing with movements and stretches working all the way down the body.  Most of these were done while seated, but some required standing, such as the twisting movements, which help to draw out toxins from the spine.  While for some standing for too long a time might be difficult, Jennifer was sensitive to this and encouraged people to use the chair for support if needed.  Things were then rounded off with some more chanting and a warm thanks to one another for taking part.

For more information on chair yoga, take a look at the following pages:

Chair Yoga from the Arthritis Foundation

NYT Spotlights Yoga for Seniors, Not Just the Svelte

Yoga For The Young At Heart